On Friday St. Louis Post-Dispatch published a long story about one of the most watched Prenda’s infamous disasters, Lightspeed v Smith lawsuit (Raul had been the first to break a story about this farce 1.5 years ago). In addition to a good article, St. Louis Post-Dispatch presented us with a Christmas gift — a transcript of a motion hearing in Judge Murphy’s chambers on November 13, 2013. We all know what followed two weeks after the hearing — a scalding order, in which Murphy explicitly called John Steele and Paul Hansmeier liars:

[…] For example, at the November 13 hearing, Hansmeier skirted the Court’s direct questions, Steele made feigned protestations, and both flat-out lied about their association with Prenda Law, Inc. in the face of documentary evidence on the record in this case, and their sworn declarations in other cases.

Our three stooges were participating: Duffy and Steele in person, Hansmeier via the phone. Duffy did not say a word beyond introducing himself (which is natural, as the purported Prenda owner is barely involved in the fraudulent enterprise). Hansmeier did all the talking, and Steele joined him at the very end. 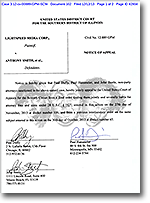 Proposed watermark for
the Prenda stationery

If you have been following the case, you know that Steele and Hansmeier claimed that the judge’s ruling, awarding attorney fees to the defense, was unfair because they knew nothing about the latest developments in the case and did not have a chance to respond. In essence, the judge gave our “heroes” a chance to argue why, while Duffy was served all the time electronically, Steele and Hansmeier needed to be served with motions and orders separately. You know, the Prenda clowns travel over the country performing the same song, to which the chorus is “We were not served!” We heard this motif in California, Connecticut, Massachussetts, and now in Illinois.

In a curious mixture of amusement and disgust, I envisioned a couple of naughty children who have been caught red-handed but continue lying in a futile hope to avoid punishment, and adults who are tired of these kids’ shenanigans, but don’t want to push too hard in a fear of messy temper tantrums.

Just look at these amazing fables:

MR. HANSMEIER: I first learned of the motion when I got a phone call from Paul Duffy telling me that the Court had granted the motion for attorneys’ fees against not only him but —

THE COURT: Right. You didn’t get notice of it until after the order had been entered.

MR. STEELE: […] I learned about this fee issue when Paul Hansmeier called me — I don’t know if it was a few days ago, a week ago, whatever — and told me what he had just learned from Paul Duffy.

Another entertaining moment: when Hansmeier whined that 70K in attorneys’ fees are too high, the judge noted:

THE COURT: You have not seen anything yet. The other defendants have not filed theirs yet. That’s what you call bargain rates around here. You are going to see what rates are shortly. As I said, ordinarily we look for six figures on notices of removal around this place. So I don’t know what your financial situation is, but in the larger picture I can just tell you that’s just kind of a foreshadowing of about what you are going to see here shortly here, I think.

The finale of that epic hearing is priceless. Meeting and exceeding our expectations, Jester John simply couldn’t keep his mouth shut and started talking. He is not a stranger to provoking judges, remember famous Wright’s “Raise your voice again and I’m going to introduce you to the United States Marshals. Get out”?

THE COURT: Who left him with a card that said call this person. They’re a very important lawyer from —

THE COURT: Obviously, somebody did.

MR. STEELE: The person that did that, I’ve never met never heard of, never spoke to.

THE COURT: There seems to be — what do you mean you didn’t file it? You entered your appearance in it.

MR. STEELE: Right. But I did not file this case.

THE COURT: Do you think that makes a difference —

THE COURT: — if you enter your appearance in a case that’s pointless, worthless, a sham?

MR. STEELE: Well, Judge, this same type of cases have been ruled in our favor in many other jurisdictions, including the state action that preceded proceeded this, the judge sided with our arguments. So in one case —

THE COURT: Mr. Steele, you are in the United States court of — in Southern District of Illinois. You are part of the Court of Appeals for the Seventh Circuit. Now, I could be dead wrong. Occasionally, I am; not too often. But I would say that this litigation the chances of being successful on appeal are somewhere between slim and below zero. This matter is under advisement. The Court’s in recess.