Is anyone willing to call a Mark Lutz and ask him these questions? 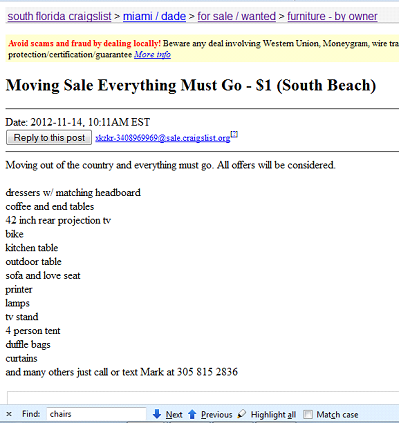 By the way, this ad is gone (expired), but there is a couple of later ones, stating simply “moving out.” With pictures.

If you have no idea who Mark Lutz is, the best way to introduce him is to be impressed by his recent impeccable performance in the courtroom.

According to one of Prenda’s local counsels (goons), Mark Lutz can be found using the following address:

According to rumors (but coming from more than one source, therefore seemingly credible), Mark Lutz has been arrested in Cabo, brought to Mexico city and held in jail for two days. When he was released, notoriously corrupt Mexican policemen had “lost” Lutz’s belongings, including credit cards. The reason for the arrest is not known at this time.

There were reports that Lutz is at it again. Although not naming himself, the caller possesses the voice that is painfully familiar. The caller states that he is “from Prenda” and mentions Hard Drive Productions as his client (a dismissed case), and of course the target “is named in a lawsuit.” These imbecile clowns don’t get it: any call mentioning Hard Drive Productions communicates nothing but desperation.

Listen to the call recordings here. Don’t forget to scroll to the bottom, where Lutz fraudulently calls himself Jeff Schultz. I’m not sure it is legal, but those guys broke so many laws it is not surprising anymore.