Ever since Mr. Sperlein rudely trespassed my life, I couldn’t help thinking about the reasons why this type of extortion business flourishes these days. I came to an obvious conclusion, though it took some time to articulate it.

Disproportionality of punishment is the major reason for abusing the law.

Imagine that the fine for failing to turn on your car’s headlights during rain is $1,000 or so, and the city allows police officers to pocket 50% of the collected fine. Abuse is waiting to happen.

Eighth Amendment to the US Constitution is mostly known for prohibiting cruel and unusual punishments, but it also specifically addresses “excessive fines”:

“Excessive bail shall not be required, nor excessive fines imposed, nor cruel and unusual punishments inflicted.” 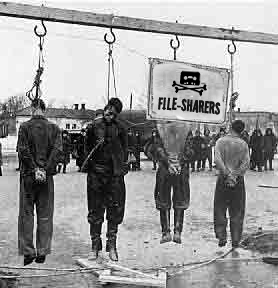 Deterrence is a powerful mechanism
of sustaining respect to the Law

$150,000 maximum fine for sharing one movie is hugely excessive and disproportionate. The threat to impose such a huge fine is the main weapon of mass fear in copyright troll cases. This weapon makes the entire extortion scheme lucrative. A $2,000 ransom is still disproportionate, but being flabbergasted by a six-figure number, victims of extortion are more willing to pay this relatively small ransom (which is even less than the cost of defense – another predatory property of this scam).

If this is the case, why blame the law itself and not the abusers who pervert its spirit? In my opinion, any law should be written in a way that addresses this concern, i.e. a law’s wording should be sharp and clear, not vague.

I also refuse to understand why an “unwillful” infringement bears the maximum fine of $30,000. A $30,000 fine is still capable of ruining a life, and for what? For a violation that one was not even willing to do?

You may argue that huge fines are necessary to deter piracy. But pulling a random person from millions and ruining his life cannot justify this goal, understandable yet questionable. Selective enforcement can be reasonable in a couple of abuse-proof cases, like busting speeders, but selective enforcement married with unreasonable fines in inherently unjust, immoral and abuse-prone. And this type of “justice” is exactly what we witness.

Justifying enormous fines for unwillful infringement by the need to relieve plaintiff’s damages is also plain wrong based on the same disproportional punishment/selective prosecution combination.

Imagine that some group of youngsters picnic on a private property without permission. They destroy beautiful grass and damage the trees. Let’s assume they know what they do (willful violation). The property owner has a natural right to demand relief so he could repair the damages caused by the trespassers. Now, I’m one of many who happen to pass by and accept an invitation for a beer with strangers having absolutely no idea that I’m trespassing. Is it still fair to pick me out of many others and demand tens of thousands dollars to replant grass I stood on for 5 minutes without realizing it was illegal?

In our particular case, actual damages to copyright holders are far from being proven, so modify my analogy by removing the damage inflicted to grass and trees, thus leaving only trespassing as an unlawful act…

Recently I had a discussion with a guy who argued that laws that are not enforced cause huge damage to the judicial system. I agreed with him to some extent: I think that there is some damage albeit rather insignificant. Requiring 100% enforcement is based on a wrong premise that every citizen is a potential criminal. I believe, maybe naively, that the majority of people don’t break laws not because of fear but because of respect to others. A mere warning in a case when a good citizen breaks a minor law is more than enough to sustain a healthy society… Anyway, we can argue about a mouse for hours, while there is an elephant in the room: the existence of laws that violate the spirit of the Eighth Amendment is far more damaging to the society than ignoring minor violations. The existence of such laws erodes the belief in fairness of the system and causes wide-spread abuses.