The Bellwether Trial (Malibu Media, LLC v. John Does 1,6,13,14 and 16 — PAED 12-cv-02078), conceived by Judge Baylson with the goal of testing copyright trolls’ evidence, initially had five defendants. Only a single one “survived” to date: Doe 16, represented by attorney Ronald Smith. All the others did not withstand the pressure and settled. As far as I understand, the pressure was unprecedented: not surprising given that Lipscomb’s extortion “business” is at stake.

Regrettably, I did not do a good job covering this lawsuit: not every event was documented.

The trial is scheduled to start on Monday, June 10. The jury selection and hearing on motions in limine will take place on Thursday, June 6, the day after tomorrow. These motions — filed last week — are the main subject of this post. What is a motion in limine? According to the legal dictionary,

Latin for “threshold,” a motion made at the start of a trial requesting that the judge rule that certain evidence may not be introduced in trial.

The defendant filed a list of his requests in a single motion, whereas the plaintiff’s requests spanned 6 filings, the majority of which, in my opinion, constitutes a brazen attempt at prior restraint and has nothing to do with due process.

(Plaintiff’s motion in limine regarding references to plaintiff)

Although it is undisputed that Plaintiff creates “adult content,” use of the aforementioned terms in this context is undoubtedly pejorative and invokes preconceived negative connotations.

If copyright trolling was mainstream news, Jon Stewart would have a field day with a pornographer asking to not call him a pornographer (deja vu). While it is unlikely to happen any time soon, our own talents compensate for it: I can only imagine the joy John Henry experienced creating this cartoon.

On a serious note, while I would agree that “troll” and “extortionist” are inflammatory, “pornographer” is a dictionary word, quite a neutral and precise description of Colette & Brigham’s occupation. Well, maybe these pornographers will disagree — they think of themselves as producers of “fine erotica,” yet if one visits their website (NSFW!), he will not be greeted by an age verification request or a warning, but by a full-screen explicit image with emphasis on genitals. Admittedly, X-Art’s hardcore pornography is a high-end one, but a blurry erotica-porno border is not defined by the cameraman’s skills. To date, the best criterion was articulated by Tinto Brass: 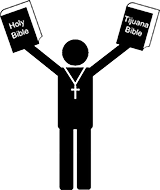 The Court should preclude Defendant, John Doe 16 (“Defendant”), from proffering at trial any evidence of, or making any reference to, lawsuits that Plaintiff has filed in the past or which are currently pending against third party copyright infringers. Plaintiff expects Defendant to attempt to reference these matters at trial in an effort to introduce unsubstantiated allegation of “abuse of process” against Plaintiff. As further explained below, however, such matters are: (1) inadmissible hearsay; (2) wholly irrelevant to any issue in this case; and (3) even if marginally relevant, sought to be introduced solely for the purpose of prejudicing and confusing the jury by the existence of collateral matters, the merits of which should not be litigated in this lawsuit.

This is probably the most outrageous out of six motions. Lipscomb makes a poor attempt to present this lawsuit as a standalone one. In the motion discussed in the next chapter, Lipscomb writes:

[…]the only facts relevant to this case are those which bear on the questions of whether or not Plaintiff owns valid copyrights and whether Defendant violated any of Plaintiff’s exclusive rights therein using the BitTorrent protocol.

WRONG. The entire idea of the Bellwether trial is to have a look at the bigger picture and decide if a myriads of copyright trolling lawsuits that have been clogging court dockets do or do not constitute a sheer abuse of the judicial system. In Judge Baylson’s words (emphasis is mine),

Bellwether trials have long been recognized as an effective means of enhancing prospects of settlement or for resolving common issues or claims in complex litigations. […] “[T]he results of such trials can be beneficial for litigants who desire to settle such claims by providing information on the value of the cases as reflected by jury verdicts. Common issues or even general liability may also be resolved in a bellwether context in appropriate cases.”).

Keeping the jury ignorant about the very idea of this lawsuit is absolutely nonsensical.

Another bleeding contradiction is related to the facts described in the blog’s previous post (events in Wisconsin, where Judge Crocker issued an Order to Show Cause as to why plaintiff shouldn’t be sanctioned for stuffing its frivolous complaints with even more frivolous Exhibit “C” — “extended surveillance” log). Today Lipscomb’s proxy Mary K. Schulz has asked for an extension of time to file her response arguing that… “Plaintiff is preparing for Bellwether Trial”! How the hell it is an excuse if, according to Lipscomb, Wisconsin lawsuits (among others) are “wholly irrelevant to any issue in this case”? Indeed, the hypocrisy of our “biblical scholar” is bottomless.

By the way, Malibu Media has no time to respond to sanctions order, but did file 12 news lawsuits since 5/28.

Let’s close our eyes to my sloppiness

Recently Raul wrote a post about the beginning of the discovery controversy (Lipscomb and his “experts” had been sitting on Doe 16’s hard drive for four months before discovering it was “unreadable”). Many events have happened since then, including plaintiff’s accusation of spoliation of evidence and subsequent heated Doe 16’s attorney’s responses accusing Lipscomb of fraud upon the court. It seems that Judge Baylson was not amused by Lipscomb’s version of the events — the judge decided to appoint an independent expert. After that, our weasel asked for a permission to talk to this expert — an absolutely unethical and outrageous request.

Now Lipscomb asks to keep the jury in the dark about the timing of this entire ordeal. If you read all the documents related to this controversy, you will inevitably roll your eyes at the following. (Have I been repeating the word “hypocrisy” often enough?):

[…] regarding the timing issue of Plaintiff’s expert report as it relates to John Doe 16’s Hard Drive, the fault lies with John Doe 16. John Doe 16 has attempted to perpetuate a fraud on Plaintiff and this Court. And, he has taken innumerable actions toward that end such as sending an unreadable hard drive, fabricating evidence, wiping evidence from his hard drive, and then spoiling the original version of the John Doe 16 Hard Drive. Uncovering frauds takes time. Here, Plaintiff is doing so with all due speed.

This post is long enough, and I won’t analyze the other three motions (somewhat reasonable, but keep in mind that even most obvious Lipscomb’s statements should be taken with a grain of salt):

I expect the next week trial to be closely watched and reported (hey, ArsTechnica and TechDirt: Prenda is fun, but Lipscomb’s extortion empire deserves much more attention than it currently receives). Regardless of the outcome, I hope that this trial is a very positive development. In the end of the day, it is not that important who wins — the Doe or the pornographer¹. What is welcomed is the wider exposure of trolls’ sickening methods. Juries are made of people, and people are not stupid, and even Lipscomb knows that. Otherwise he wouldn’t make the censorious requests discussed above.

As expected, the defendant filed his oppositions to Lipscomb’s motions in limine (and Lipscomb filed his opposition). As for the three motions analyzed in this post, defendant’s arguments are basically the same as mine (to be fair, not everyone agrees with those conclusions):

¹Don’t get me wrong, I pray for the defendant to win! However, it is not a secret that at least 70% of putative defendants did what they were accused of. While undoubtedly this case will have a huge impact on the future of the Bittorent litigation, finding the defendant liable does not automatically make copyright trolling “business” legit (as acquitting him won’t result in extortionate practice go away at once).