A copyright troll attorney Brett Gibbs continues avoiding questions about the alleged identity theft — after his attempt to remove Judge Wright from the case has failed.

Today DieTrollDie posted an update about yesterday’s dismissal: Brett Gibbs dismissed Ingenuity 13 v. John Doe (CACD 12-cv-08333) pending before Judge Wright. I tweeted about it chuckling at the fact that a miserable attorney couldn’t avoid whining even in a dismissal notice… and forgot about it — until I was pointed to the fact that this is the same case where Judge Wright granted Morgan Pietz’s discovery that supposed to shed some light on the mysterious AF Holdings / Ingenuity 13 CEO Alan Cooper.

Given the fact that Judge Wright has dismissed all but two AF Holdings and Ingenuity 13 cases pending before him, for example, 12-cv-05709, 12-cv-06659, 12-cv-06636, 12-cv-06664 (I will update this post later and list all the cases), and has not dismissed this particular case, yesterday’s dismissal by Gibbs is a douchebaggery at its zenith: it is a brazen attempt to avoid answering the damning questions right after the failure of another attempt to do it by removing Judge Wright from the case.

Brett Gibbs has just incriminated himself beyond a reasonable doubt.

I hope that Judge Wright will not leave this insult to his intelligence unpunished. I do not expect that he will allow this case to be closed. [Update: I’m not correct — see a lawyer’s opinion at the bottom.] 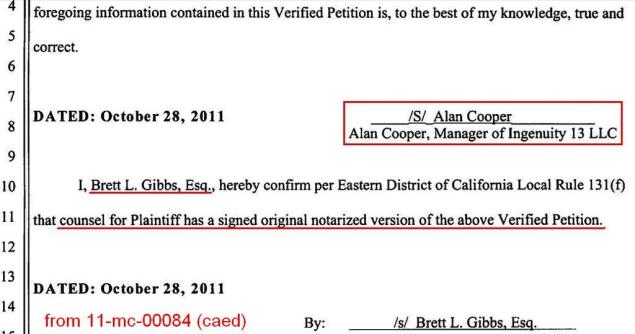 It’s even more interesting: the very same day Gibbs attempted to dismiss the case, Judge Wright issues an order that directs parties to prepare a joint conference statement and discusses conference dates, all related to Alan Cooper interrogatories. This indicates the seriousness of judge’s resolution to dig to the bottom of this issue, and Gibbs’s dismissal looks even pettier in light of this order:

I asked an attorney a question if Judge Wright has a power to stop the dismissal. Here is his reply:

No, but the Judge retains authority/jurisdiction as to all remaining collateral issues such as sanctions as well as potential inappropriate conduct of counsel/parties. I believe that since the discovery order was issued after the dismissal, it is likely that the Court sees the dismissal as potentially motivated to hide inappropriate conduct or even perjury etc… Technically the judge could still allow discovery on the Alan Cooper issue or even order Gibbs or Steele or even “Alan Cooper” to appear and testify. If they refuse, the court can invoke its plenary contempt power. That’s when the ____ hits the fan.