Did you hear that? John Steele is coming up with a new way to game the judicial system and defraud citizens! Surprised? Did anyone really hope that robocalling was the final excrement of Steele’s voracious greed?

Nope. Certain people have been born to prove that the ethical abyss is bottomless.

As DieTrollDie reports, Prenda Law started sending out some kind of Nigerian scam letters written in Legalese. Like with robocalls, it seems that Prenda utilizes the entire database of addresses they were able to loot using unsuspecting courts as burglary tools. In particular, not only the Does who are listed in open cases, but also the people who were dismissed long time ago, have received (and continue receiving) “Letter of request for informal discovery.” For example, the letter embedded below refers to a case that was dismissed more than 3 months ago: this is not a mistake, this is a deliberate fraud on the federal court.

DieTrollDie did a good job analyzing the contents of this document, and I’m writing this post mostly to increase visibility and hopefully prevent potential victims from the perils of contacting the troll. In short, Prenda’s mailing is simply another attempt to lure people into contacting the con-men and possibly saying something self-incriminating.

If you have received this document, you absolutely don’t have any duty to reply to it. And don’t even think about contacting Prenda without an attorney. If you have time and resources to strike back, hire a good lawyer, who will monitor the situation; if Prenda fulfills its threats of trying to compel you (which is extremely unlikely), your lawyer can send a counter-request for discovery (yes it’s a two-way street!), which, believe me, will devastate the fraudsters. Or, this lawyer can kindly ask Prenda to pay for a reputable (and expensive) licensed forensic investigator of your choice: if they don’t agree (and they won’t), they will definitely shut up.

The letter threatens to file a “motion to compel” (BTW it is stated that a sample motion is attached, but no such attachment exists). Hogwash: first, in many situations there is no open case to begin with, so how the hell can they manage to file a motion without a case? Second, and most important: I’m not aware of any precedent of a judge allowing such a bizarrely broad discovery request (which includes a visit to Doe’s premises and raiding his private documents and financial records): on the contrary, any previous attempts to secure invasive discovery were unsuccessful. So, there is no way that any judge will approve such a motion (which will never be filed to begin with).

Fortunately, less and less people really think that Prenda has slightest merits to harm anyone beyond bullying. Yet, no matter how reasonable our arguments are, there will always be a few who are not used to listening to the voice of reason: such people allow fears to rule their lives. Hell, believe it or not, the 419 (Nigerian) scam is still alive and well, given that virtually anyone knows about it. It is beyond anyone’s abilities to prevent some people from irrational actions.

For the reference, here are the contents of the scary package for your amusement (and I’m sure that FBI, Attorneys General or IARDC would also enjoy reading this document knowing the circumstances):

A deeper question one needs to ask oneself is…

If their case was so awesome, the evidence so overwhelming… why do they need you to give them evidence to make a case?

Maybe because they never had a case that would survive.

This is another dirty trick in a long list of dirty tricks, how much longer are the courts going to allow these cases and lawyers to continue before ending this spree of terror? 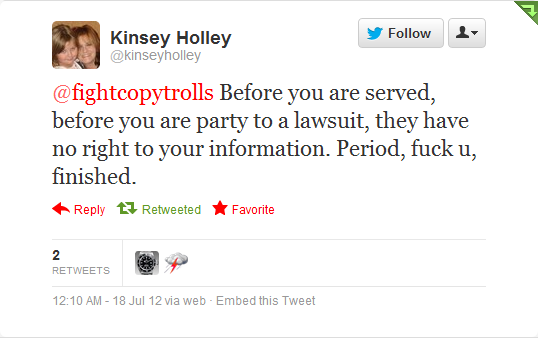 The follow-up post: Prenda’s “Letter of request for informal discovery”: an attorney explains why it is patently invalid.

DieTrollDie’s follow-up post with practical recommendations: What to Do About the Prenda Law “Informal Discovery” Papers?

58 responses to ‘New low of Prenda Law: trolls indiscriminately and inappropriately send out “Letter of request for informal discovery”’