An anti-piracy outfit Rightscorp, Inc. is a slightly different troll species. It does not file lawsuits against individuals (yet?), it does not demand thousands from alleged file-sharers. Instead, it sends myriad notices to ISPs, and many providers match troll-supplied IP addresses to subscribers and forward those notices to them without disclosing the subscribers’ identities to the troll. Rightscorp demands only a nuisance amount — $20 per infringement. Obviously, only the most ignorant and gullible part of the US population rushed to pay, but even if a tiny percentage of recipients pay, it translates to quite nice loot. Metaphorically speaking, Rightsorp is in business of throwing hundreds of thousands pieces of feces against the wall: some do stick.

Forwarding small demands via ISPs is certainly not as bad as “conventional” copyright trolling (yet it is still an extortion-based model that exploits FUD and insanely high statutory rates). The problem is that this year we have been witnessing a very troubling development: while in the past the troll knew only IP addresses of alleged infringers but not their names, now Rightscorp aims at unmasking their targets’ identities. Rightscorp bullies mostly small ISPs by filing “petitions” (like this one) and sends out subpoenas without court leave. The trolls state that ISPs owe them people’s identities, and doing so our “businessmen” simply ignore the case law they don’t like. As Rightscorp’s CEO Christopher Sabec told TorrentFreak,

The [RIAA vs. Verizon] Court case used flawed reasoning in concluding that an ISP such as Verizon is not a ‘Service Provider’ even though it clearly meets the definition laid out in the statute.

The only other US company that adopted this kind of parasitic business model is Ira Siegel’s CEG-TEK, but unlike the latter, Rightscorp is public (NASDAQ: RIHT), yet with capitalization of just a couple of millions and extremely volatile penny stock:

It is not a secret that in order to boost their perceived significance, some Twitter users buy fake followers in bulk. I tweeted my concern, and Tim Cushing pointed me to a fantastic resource (TwitterAudit) that evaluates how real one’s followers are. The audit confirmed my suspicion. Here is the comparison of the results for @rightscorp and yours truly’s @fightcopytrolls: 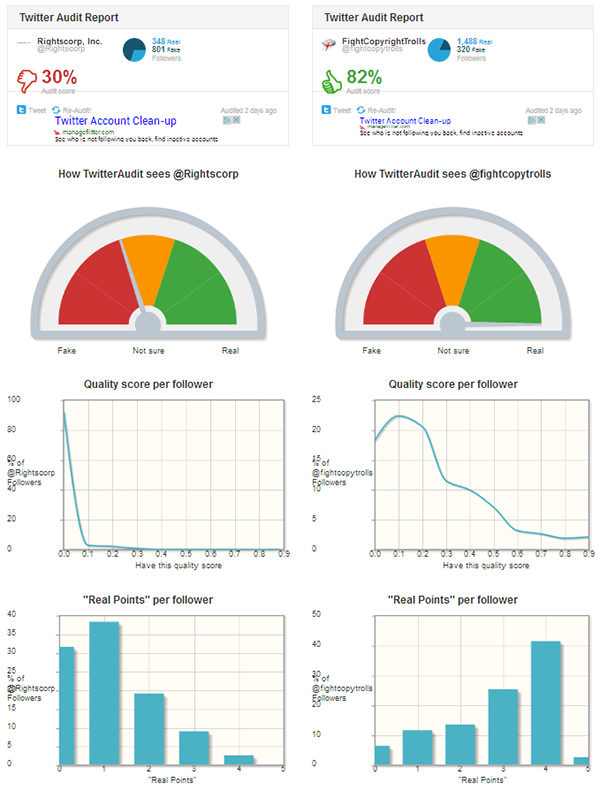 A company that is trying to boost its significance by artificially inflating the number of its social accounts’ followers is undoubtedly engaged in deception, and since Rightscorp is public, this (admittedly small) fraud may be a SEC’s concern. Or is it not a big deal? I will try to contact the regulators tomorrow to find the answer to this question. Even if it not a big deal from the SEC’s viewpoint, this discovery was still worth publicizing as it confirms one more time that extortion and fraud are siblings.

4 responses to ‘Rightscorp: extortion and fraud are siblings’